Taking stock of the dock 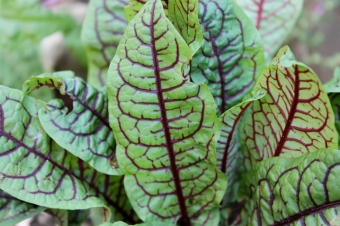 It was curiosity at first sight.

Turn back the clock to late May and my mom was on the loose in a greenhouse in Niagara-on-the-Lake. A very colourful greenhouse filled with flowers, potted plants and all the makings of a dream, non-food garden at a modicum of the cost of what she would be paying in Waterloo where she lives. (Another good thing about living in Niagara — our greenhouses are filled with bargains).

As she moved from one corner of the expansive glass structure to the other like, well, a greenthumb in a greenhouse, I meandered down the herb and veggie aisle. Then I saw it. It was green and leafy with deep red, intricate veins and since I have a deep-seeded appreciation for many things green and leafy — and edible, of course — I locked my gaze upon it and made a bee-line toward it. Was this some kind of unusual chard? Oh, sweet Swiss chard, how I love you.

Were they beet greens? I love you, too.

It was neither, though clearly, they could have fooled me. It was red-veined dock, according to the blurb on a nearby sign. The great thing about this greenhouse, Sunshine Express, is that it's like the living version of the Idiot's Guide to

Gardening, with picture instructions showing a plant's preference for shade or sun and detailed descriptions of all that can be reaped by planting it.

It had me at spinach. (See reference above to my appreciation of all things green, leafy and edible). So, I bought it, unsure of where I would put it in my postage stamp garden, which was already pretty full many green and leafy growths, though not all edible.

I brought my doc home and stationed it between my chard plants, one of which has turned into a tangled mess of seed-laden tentacles from which I hope to harvest future plant generations. And there it has meandered, like me that day in the greenhouse.

I love my dock. It's beautiful and virtually fool-proof. It's like the perfect partner: low maintenance but fascinating to be around and something you want to dote on. It tastes nothing like spinach, though. In fact, it tastes better. Pick it and its purple stems bleed finger-staining beet-coloured juice. Guess that's why it is also aptly known as bloody dock, though not the most appetizing name if it's being marketed as an edible.

Bite into it and it tastes lemony. It's refreshing and sour with a really bitter finish. But it's got good texture and makes a flavourful addition to salads and a great lettuce substitute on an egg salad sandwich.

Here's the rest of the scoop on dock, which, admittedly is a name that conjures images of water and lazing in the sun more than something to sink your teeth into. It's a plant with an identity crisis. It's also known as sorrel, something

Linda has plied me with many a time in my CSA baskets, though her sorrel didn't have the pronounced purple veins. It's taproots can be used to make natural dyes. And though it can play the role of ornamental or edible, it can also be invasive like a weed.

So far, my eating is keeping it in check.