The cherry on top of a warm spring 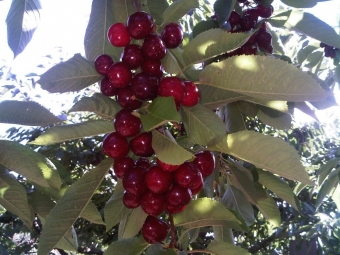 Being a carefree bachelor may just have been the best business decision Oscar Weiland has ever made.

Turn the clock back to the late-1960s and the then-newly-minted Fonthill farmer decided he would rather go to Europe than hang around the family farm, minding the cherry harvest.

Oscar told his mother to put a 'Pick Your Own Cherries' sign at the end of the driveway to their Haist Street orchard and let the rest take care of itself while he took care of his wanderlust across the Atlantic.

People came. They picked. And every year since then, Weiland, now with his wife Jill, has offered up the 16-acre orchard, filled with 12 varieties of cherries, to those who don't mind having to do a bit of work to feast on the quintessentially Niagara fruit.

Thanks to a warmer than usual spring this year, cherry season has begun in Niagara. It's the earliest Oscar said he has ever seen trees offer up their harvest. Last Wednesday, the Weilands set their sandwich board at the corner of Haist and Canboro Road, beckoning local cherry lovers, including me, to come pick seven days a week for the next month, at least. The simple, hand-painted sign pointing to 1625 Haist usually doesn't make an appearance until June 25.

I first met the Weilands three years ago on assignment. It was for a story about the kick-off of the local cherry harvest and after chatting with Jill, who revealed she loves cherries so much, she married a cherry farmer, I set off to pick three litres.

It was my first experience doing the pick-your-own deal with cherries. Truth is, I was indifferent to the red, bulbous fruit that most people think is just peachy. Then I ate a Weiland cherry. It was the best cherry I had ever tasted. It was firm, sweet, large and a colour that only Mother Nature could create. I took them back to the newsroom and cultivated some new converts and customers for the Weilands. I swear I start frothing at the mouth when I seen the sign go up each summer signalling they're ready for the likes of me to start darkening their barn doorway.

Today was my first pick of the season. As I plucked cherries from the branches, I got to chat with Oscar and learn a little more about the man whose cherries I love.

Turns out, Oscar and Jill were teachers by trade — something that Oscar said enabled him to sleep at night. That wouldn't have been the case if the only income he had known came from the land, he said.

He's also a bit of an accidental farmer but one with some serious agricultural aptitude.

He took over the farm from his father in the early 60s. His father had only purchased the plot in 1957, but as Oscar recalled, his dad wasn't so good at working the land. When he mentioned he was planning to sell, Oscar stepped up and bought the farm.

The family grew peaches for a cannery in town, one that has long since disappeared. But after one season of being yanked around by the cannery — Oscar's first delivery wasn't ripe enough and when he returned with the same peaches a few days later, they were deemed too ripe — he yanked out the peach trees, replacing them with cherries.

Many of the trees in the pristine orchard are the originals Oscar planted after learning peach growing was the pits. He's made room in recent years for some dwarf trees — perfect for picking because they provide plenty of low-hanging, delicious fruit.

With his pruning shears in hand and taking a break from chopping fruit-laden branches from a struggling tree, Oscar lamented the state of farming, the competition from imports and the fate of his farm, not big enough to provide a living for his son without the assistance of an off-farm job.

"Who knows how long we'll keep going," he said.

For now, though, his trees — and the fruit of his labour — are ours for the picking.

Other sources of Niagara cherries:

I don't know the address but there's a home on Canboro Road in Fonthill, about 750 metres west of Haist Street that offers ready-picked and pick-your-own. It's a white, two storey home and has a sign in front. Also good cherries — a place I stopped on my way to work a few times for a ready-picked pint.