Ten kilometres with the real Niagara 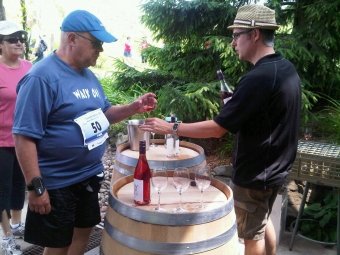 I sidled up to the tasting table at Tawse Winery and went for a new release.

It was straight out of the barrel.

Red Gatorade, that is. Then I took on the steep incline of the Niagara Escarpment looming just steps in front of me.

As much as I wanted to sample the vintages — the real reds and whites streaming from the curvaceous bottles at the winery that straddles the border of Beamsville and Vineland — I knew better. I still had about eight kilometres to go in Saturday's Twenty Valley Wine Country Run and a lot of escarpment scale. Gatorade would have to suffice as I pounded the pavement toward the finish line.

Still, what a breathtaking tour of some of the most beautiful countryside this peninsula has to offer. I signed up for the Wine Country Run, modelled after the Marathon du Medoc in France, to accomplish an athletic goal I had set for myself: to run 10 kilometres at least once in my life without stopping.

I chuckled at the options I was presented when I signed up for the event, which also features a half-marathon, relay and four-click stroll. Would I prefer Gatorade at the pit stops or the top-notch Niagara tipple being poured by some of the who's who of the region's wineries.

I checked Gatorade. The pragmatist and goal-getter thought it was the better — the safer — of the options.

But from the moment the bus dropped us off at the start line at Malivoire Wine Co., where the rose flowed like, well, like Gatorade during a road race on a hot day, I started to doubt my pit stop refreshment choice. I indulged in a sample of the Lady Bug Rose, which, in its fruity deliciousness, went down easy, and began to wonder if it was wine that would get me across that finish in finer form than the electrolyte-charged sports drink I had signed up for.

Getting ready to run at Malivoire with fellow runners, Monique Beech and Tim Munroe.

I felt a pang of regret at each pit stop I passed — Vineland Estates, Calamus Estate, Alvento — because I didn't sample the fermented grape juice goods. Still, what I didn't sip in my wine glass, I drank with my other senses during my job. The scenery along the route was stunning. Pristine vineyards stretching to the ends of the earth. The smell of cool, damp earth as we rounded the bends and twists on the tree-canopied road to Ball's Falls Conservation Area. The sound of the powerful current of the Twenty Mile Creek as it rushed toward the edge of the escarpment and plummeted hundreds of feet below to continue swaggering toward Lake Ontario.

The vineyards near Ridgepoint Wines

All were routes I have travelled many times on four wheels be it on assignment or taking relatives on wine tours. What my jog through wine country confirmed was how much perspective is lost — how much of the true experience is missed — behind the wheel of my car. Every drive I'd taken off the beaten track, I had been lulled into thinking I was crossing paths with the real Niagara. Now I realize how much of an area that I trumpet I had never met; how much of this great beauty I had never really seen.

An old barn near Ridgepoint Wines

It all compelled me to run on, energized by my surroundings.

I'm sure the Gatorade helped, too.

Still, a toast to the organizers of this event. What a brilliant way to show off what Niagara's Twenty Valley boasts. Even on the other side of the finish line, the taste tour of the Twenty didn't stop. Wineries, including Fielding Estate, Henry of Pelham, Cave Spring poured while some of the region's culinary gems, such as Inn on the Twenty and Lake Land Meats re-fueled us with amazing post-race rewards, such as pea shoot salad, a lobster and seafood quiche, flank steak sandwiches, and just about every game meat you can name.

The party gets started at the finish line

I was finally able to try some Tawse wine — a 2009 Sketches of Niagara Riesling. Sweet on the tongue and tart as it went down, it was worth the wait and the 10,000-metre trek to get to it.

If I learned anything from this event, aside from knowing I can run 10 kilometres without stopping, it's that I need to spend more time hobnobbing with Niagara sans automobile.

Here's to next year's race and in the meantime, another chance to get know Niagara outside the confines of a car. The Friends of the Greenbelt are hosting the Tour de Greenbelt again this year, with two dates to tour Niagara by bicycle in September.

The ride takes you to farms and wineries and celebrates pedaling up to 55 kilometres with a local feast at the finish line.