Tossing the power plant out of the salad bowl 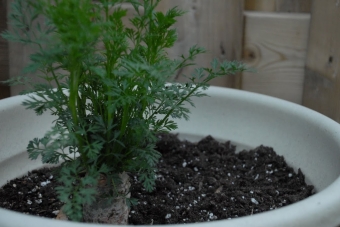 I just came in from checking on my experimental Holland Marsh carrot.

This is the one that I bought at the grocery store months ago and it started to turn to seed in my fridge. As an experiment, I stuck it in a flower pot in my backyard, with the hope of harvesting the seeds it produces so I can plant some of those Marsh carrots here in Niagara.

I'm not holding out too much hope because it's likely a hybrid whose offspring will be something entirely different and let's face it, I'm not so good in the garden.

I'm not fazed. I know that come the fall, there will be a new harvest of Holland Marsh carrots on store shelves to feed my hunger, if not my curiosity.

From what has been affectionately dubbed Ontario's salad bowl.

But plans are afoot to toss something into that salad bowl that just doesn't belong in the mix; something that may put that supply of carrots and the people growing them in jeopardy: a gas-fired power plant.

Readers of this blog may already be up to speed on this issue thanks to guest blogger and Holland Marsh farmer Avia Eek keeping us in the loop.

For those who haven't seen Avia's posts, here's the one-line plot summary: the province wants to build a 393-megawatt natural gas-fired power plant to satiate the energy needs of residents who don't live in the Marsh.

The message from the province is that it has a responsibility to ensure a reliable energy supply for Ontarians.

Here's the problem: the Marsh has been designated a specialty crop area. It's in the greenbelt, that agricultural preserve created by the province five years ago to protect Ontario's precious farmland.

I have mixed feelings about the greenbelt. The food sovereigntist in me appreciates what the province has done to ensure Ontario will always have cropland. But as someone who has reported on agriculture since before the advent of the greenbelt, I have seen and heard the difficulty this imposed farm preserve has had on farmers here in Niagara, which is also part of the 1.8 million-acre swath.

The legislation is confining and constricting. Farm or bust on those greenbelted lands. There's no chance of farmers with dollar signs in their eyes to sell to developers with even bigger dollar signs in theirs. With the exodus of three major local food processors in the past five years and growers begging to no avail for government help to ensure local agriculture remains viable, some predict this agricultural preserve is destined to become a farming museum.

There have been pleas for a review of the Greenbelt Act five years later, a review to see what works and what doesn't before people walk away from the land and let it turn to weeds. But the province has held fast to its stance that no review will happen until 2015.

Meanwhile, the land that the current provincial government pats itself on the back so frequently for protecting is being eyed by that same government to build a power plant. Why does this government feel others should follow the rules but it doesn't have to? It's not tough to understand why people become cynical and disillusioned with the powers that be.

There has been huge opposition to this development. There are fears among growers and residents that this plant could harm the very soil sustaining us — the soil from which so much of our food sprouts. Do you want to eat a carrot or onion grown so close to gas-fired power plant whose effects on the environment aren't known?

Doesn't the province also have a responsibility to ensure a reliable food supply for Ontarians?

The answer is yes.

The issue was recently challenged at an Ontario Municipal Board hearing. A decision has been reserved for the time being to allow people to comment.

This is our chance to let the decision makers know that putting our farmland, food source and the livelihoods and economic viability of our rural neighbours at risk is unacceptable.

I urge everyone reading this to pick up a pen and ask the province to pull the plug on the Holland Marsh power plant. Our environment, health and our ability to feed ourselves depends on it.

All comments can be sent to:

To learn more, check out the following links: