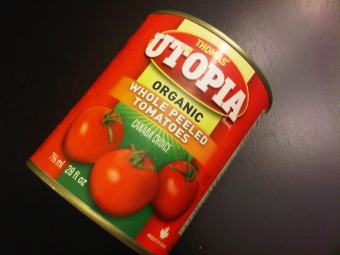 Ever since the 2008 closure of CanGro Foods — Canada's last fruit cannery — there's a big part of me that feels consumers should do what they can to protect the Canadian canneries that remain, no matter what they might be packing.

Call it patriotic consumption. Call it just wanting to preserve what's left for other farmers. After all, the abrupt announcement of the closure of CanGro, which preserved hundreds of tonnes of local peaches and pears under the Del Monte name in nearby St. Davids, left hundreds of farmers devastated. Word came in January that closure would happen only months later if a buyer wasn't found by June. It didn't leave growers with much time to plan for the worst — only lament it and then live through it that summer.

So here's my plug for a surviving Ontario cannery that's doing good things by supporting the province's tomato growers and providing a product that's become a pantry staple for me.

About two years ago, in an attempt to boycott CanGro products after its decision to shutter the St. Davids operation, I turned my back on another of CanGro's labels — Aylmer — and its tomatoes.

Tucked onto the very bottom shelf in the health food section of Zehrs were a few yellow and red cans of Thomas' Utopia tomatoes begging to be the replacement. The label said organic, which sounded good to me. It also said the tomatoes were packed by Maidstone Canning in Ontario, which sounded even better. I took the chance and bought a can. Then I did some research.

Three generations of Thomases have operated the cannery in Essex County, contracting growers in Essex, Kent and Lambton counties to produce what goes into each can. Not only was I supporting a Canadian cannery with my purchase, I was supporting Ontario farmers. Eureka, I found another local product on grocery store shelves — one that I could turn to at any time of year for a local food fix.

A 28-ounce can of whole tomatoes runs between $2.69 and $2.99 — more than double the generic store label or other household name brands. I don't care. To me, that's good value for domestic jobs and keeping Ontario farmers in business. I'm also happy with the quality of the product, though I can't claim to be a connoisseur of canned tomatoes and talk taste details till I'm red in the face. They're just good. That's all I know.

A can of Thomas' Utopia diced organic tomatoes runs about $3.19. But I once read to stick with whole tomatoes because the diced ones are only the bits that were salvageable from lesser quality fruit. Besides, the whole ones break apart easily when cooking, so who needs diced, really?

Even though the countdown is on to the local field tomato harvest and Ontario greenhouse versions have (finally) replaced the Mexican editions in the produce section, sometimes, a girl still needs canned tomatoes. Like I said, they're a pantry staple and at this time of year, serve as the base for my spring vegetable soup, which I just wing with peas, garlic greens and any other local veggie I can get my hands on at this time of year.