Singing a different tune about fiddleheads 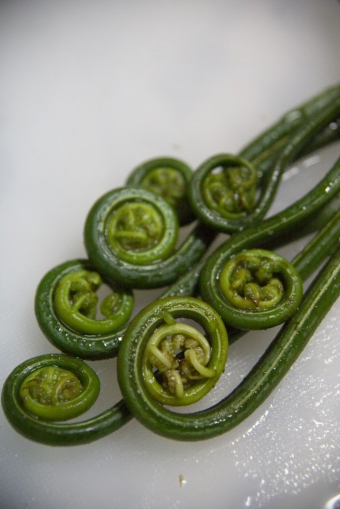 I realize that with the end of fiddlehead season nigh, this post is kind of late to herald the attributes of a veggie that marks the start of a new year of local eating.

But as cliches go, better late than never.

I'll be honest, I've always view fiddlehead season with such optimism. It's the first sign of spring, a new cycle of local vegetables and fruit coming into season and the end of months of relying on root vegetables for my local fresh food fix. Don't get me wrong, I love a good tuber, beet and bulb, but by March, I'm ready to bid adieu until the fall. When I see fiddleheads appear at farmers markets and the grocery store, I know there will be fewer root vegetables in my immediate future.

To celebrate, I do what any locavore singing the root vegetable blues does. I buy me some fiddleheads. I get them home and follow the food safety guidelines that prescribe soaking them in cold water for 10 minutes and then boiling them for another 10. But for the past few years, I didn't know what to do with them after that. So I ate them. Plain. Or with a little bit of butter to jazz them up.

As with any boiled vegetable, the experience was underwhelming at best. Kind of gross at worst, given the strong flavour of fiddleheads. Still, I did my locavore duty, got my fill for the year after that one meal and was ready to move on to asparagus.

This year, I went through the same motions of feeling excited at fiddleheads' arrival in stores, scooping up handfuls to take home and then... I did something different.

I soaked them and put them in my handy steamer for 10 minutes. Then I sauteed them with ginger and a splash of soy sauce. I realize the ginger and soy sauce probably cancel out the virtually non-existent food miles that my fiddleheads bring with them to the dinner table but who cares? I have a new favourite local vegetable -- one that I wolfed down at dinner tonight. Turns out, I really love fiddleheads and I'm sad to see their season come to an end, leaving what's left of them to grow into big, bushy ostrich ferns. Until next year, of course.

If you're not sold on fiddleheads, give this a whirl:

Steam fiddleheads for 10 minutes. Heat oil in frying pan on medium-high heat and add ginger, stirring it around for about a minute. Add steamed fiddleheads. Saute with ginger for about three minutes. Add a splash of soy sauce and saute for another minute. Then, eat up!