Oma Mayer vs. The Tofu Schnitzel 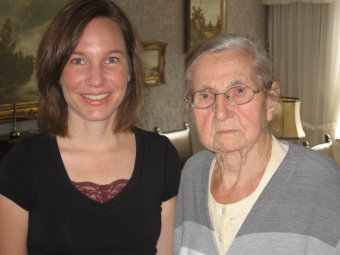 The creases on her wrinkled nose deepened in disgust.

She pulled the package close to her 96-year-old eyes before pulling it away again, trying to focus. Trying to believe what she was seeing.

I had just returned home from the Reformhaus (that's German for health food store) in Zweibrucken, Germany, one September day last year, proud of my find. It was tofu schnitzel and being that this was my last meal with my Oma Mayer before departing to see relatives from the other side of the family, I was excited at the prospect of having something on my plate vaguely resembling what my Oma was cooking for herself and my husband. Schnitzel was on the menu with salt potatoes and her famous cucumber salad.

I was determined, as the vegetarian, to fit in at the dinner table that night. Or maybe, if I'm being honest, I was determined to make this cornerstone of German cuisine conform to my dietary choices. Still, I was thrilled that one could even find tofu schnitzel in Germany.

My Oma grunted in disgust and shoved the cardboard and plastic package of pre-fab schnitzel back into my hands.

In all her 96 years, my Oma had gone from cleaning clothes on a washboard with a bar of lard to doing laundry in a high-tech, high efficiency, energy-efficient, electronic washing machine. Though she'd never sat in front of a computer, she knew what email was. She has a big screen TV. Despite all the progress she's seen in her long life, this was one advancement that had even her floored. I was certain as she turned her attention back to the real meat on her kitchen counter, leaving me holding my faux Wiener schnitzel, that she wondered when the world went so wrong. What the heck had leached into the Mayer gene pool to cause her granddaughter to be this way? Not become a vegetarian, but rather, bring a phony schnitzel into her house.

Still, she watched over me with care as I pan fried my schnitzel next to her real McCoy on the stove, ensuring that I followed the instructions: three minutes a side in an oiled skillet, fry till golden brown. When I let it cook on one side for four minutes, she pointed to it and in the pidgin we had created, asked if I shouldn't be flipping it. In hindsight, I can't help but think it was more morbid curiosity that compelled her to watch me so closely. Like a car wreck, she couldn't look away.

When we sat down to dinner, she scrutinized every bite I took and peppered me with questions. Was it good? she asked.

She recoiled in disbelief.

I offered her a piece. She recoiled further, making a high-pitched, semi-terrified squeal as she pulled away.

My meal wasn't offensive  because it was tofu. As it turns out, my meal was offensive because it came from a box. In all her 96 years, my Oma has never eaten a single bite of processed food. She only cooks from scratch, she told me in half English, half German.

This from a woman who's only physical failing in nearly a century of life is that her slight frame is arthritic in the odd spot. Mentally, she's sharp as a Henckel knife. She watches soccer and the news every chance she gets, both with a beer beside her.

She can curse the ref with the best of them and give you a more detailed play-by-play and post-game analysis than any colour commentator on television. She gardens, reads two newspapers a day, cooks her own meals, does her own laundry and indulges in the odd afternoon nap. She even drove — and drove well — until she was 95.

It seems my Oma Mayer has tapped into the fountain of youth and its elixir is pouring from the vegetables she grows in her garden, from the fresh meat she and now my aunt Sigrun buys for her several times a week from the butcher, from the rye bread she slathers with butter or cheese at breakfast, from the beautifully bright orange yolked eggs she enjoys, from the meals and cakes that she has always made with nothing more than simple ingredients. She has always been the best cook and bake I've ever known. And yet, here I was darkening her door with my pseudo-schnitzel. Worse yet, I was suggesting she try it.

My Oma is a life lesson to behold and one that I hope won't be forgotten after she's gone. I haven't had a tofu schnitzel — or tofu cutlet, as its called in Canada — since then. If I was a betting woman, I'd have money on her letting that frying pan I used that night soak a little longer than the rest of the dinner dishes. It also likely got a more thorough scrubbing than any other plate or utensil needing washing. You know —  just to be safe that none of her real food ever gets contaminated by something trying to resemble food.

One recipe I did manage to learn by observing my Oma just as closely as she had watched me in the lead-up to that schnitzel dinner was for her soul-warming ratatouille. Like a true culinary wizard, my Oma doesn't use exact measurements to guide her, only her tastebuds and wisdom.

scant teaspoons of salt and sugar to taste

Add the zucchini and a bit of water. Stir until softened. Add tomatoes. Simmer until they break down a bit and become saucy. Add salt, sugar and pepper. Let simmer a few minutes longer and serve over rice. Prep and cooking time takes about 45 minutes.

This entry was inspired by Apron Strings, a series of recipes and touching memories gathered in honour of Mother's Day and posted on the Fiesta Farms blog.