A Sunday morning with my new wine mentor 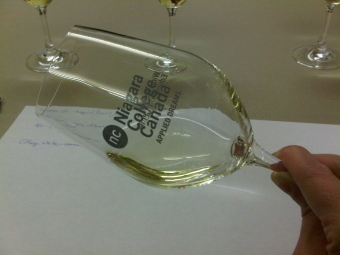 He bounded into the classroom with energy that seemed unnatural for a Sunday morning at 11 a.m.

Josh was his name and this gregarious guy who barely looked old enough to drink was going to lead us in last week's educational session about Chardonnay at the Niagara College Teaching Winery. Patriotically called Chardonn-Eh!, the hour-long tutorial promised to teach a small but keen group all we would need to know about oaked versus unoaked and other idiosyncrasies about this mainstay vintage.

As a wine novice — yup, I'll admit, at 33, I'm still more of a beer girl, despite my mom's encouragement to join Team Fermented Grape Juice — I was eager to spend my $10 to start my education about Niagara wine beyond what I've learned about surplus crops and labeling battles.

Problem is, I was sitting next to one of the most intimidating Wine-Os I know. My mom. She made the trip from Waterloo to join me and my ever-obliging husband Steve in the session.

She looked a little skeptical that such a young pup could teach her much about a wine she had undoubtedly dissected during countless wine sessions she attended while living Kelowna, BC, the centre of the Okanagan wine universe. She could also very well be a card-carrying member of the ABC — Anything But Chardonnay — crowd because, after trying many in her time, she is not a glass-hoisting fan.

The questions started coming. Who are you Josh? she asked.

Josh was a graduate of Niagara College's winery and viticulture technician program. Admittedly, also a beer guy and little tired on this rainy Sunday. Before our arrival to a non-descript room in the cellar of the college winery, Josh had poured six glasses of wine in varying shades of straw and gold for each of us. A blank sheet of white paper sat on the table in front of them.

The reporter in me thought how perfect the set-up was for taking notes. I later learned my blotter, soon filled with scrawls, was meant to be used as the backdrop for each glass to be held against to study the colour of its contents.

Josh told us he was changing things up for this session. We were going to taste several of the college's vintages — not just Chardonnay — and try to guess what they were. Steve and I giggled sheepishly, given we're not exactly tuned in to tipple. We deferred to my mom and another wine aficionado in the session, Judy, to lead the pack in the vino guessing game.

Still, Josh did go over the five W's of Chardonnay.  He described it as the ideal girlfriend.

Unlike the stronger personalities of Riesling or Gewurztraminer, Chardonnay was described as the kind of grape that could take its direction from the winemaker more easily. It was more malleable and easily manipulated during the winemaking process, though my mom told me later she thought Chardonnay could be pretty bossy and opinionated, particularly the Californian vintages with their predominantly oak tastes that come from their fermenting in wooden casks.

Josh told us that American oak has a looser grain, lending itself to the heavier, oaky taste common among Californian Chardonnays. By contrast, the French oak has a tighter grain, weakening down the powerful punch that the wood barrels can lend. The college uses Hungarian oak and also has an unoaked Chardonnay — a concept totally foreign to the Californians Josh said he has encountered.

The barrels in the Niagara College Teaching Winery Cellar.

Then the tasting began. It started with a Gewurztraminer and ended with a Dean's List Chardonnay, with a Sauvingnon Blanc, a white blend, unoaked chardonnay and others in between.

It wasn't long into the session led by jovial Josh that we were all shouting out answers as we studied, sniffed — I learned that swirling the wine in the glass creates different aromas than just pouring and smelling — and sipped.

The Gewurztraminer had a floral smell. The Sauvignon Blanc reminded me of my cat Otis and the surprises he sometimes leaves outside of his litter box. And this is why I loved this session because you could tell Josh the wine smelled like cat's pee. It was a completely non-intimidating environment in which to learn and explore wines uninhibited.

Soon I was shouting out guesses in Name that Vintage, wrong as they may have been. We peppered Josh with rapid-fire questions about the college wine programs, Sommeliers, and just about everything else. Josh could barely keep up with our lively, enthusiastic — OK, slightly buzzed for some of us — ways.

I left a fan of the college's 2007 unoaked Chardonnay. I wish I could tell you that it had notes of this fruit or that. But I can't. My unsophisticated palette can only tell you it was good. It will be a great sipping wine for summer days on the patio.

Talk about guilt-free indulging. The proceeds from the sale of the wine that students have a hand in producing goes back to supporting the program at the college. It's drinking for a good cause.

This month's session is "Tying One On," a seminar in the vineyard about typing grapevines, site selection, pruning and canopy management. Being a self-professed ag geek, I can't wait. The seminar will be capped with a few samples, no doubt tasting better by the end of the hour because of my greater understanding about what goes in to growing the grapes for the college's impressive wines.