Paying homage to a miller with muffins 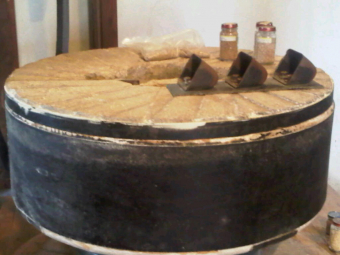 My house smells like an aromatherapy test lab right now.

Vanilla. Warm sugar. Toasting grains. Sounds like the making of the perfect scented candle. Better yet, it's the making of a batch of homemade bran muffins. I'm not much of a baker, but hearing that grain would be ground at Morningstar Mill last weekend, I was feeling inspired to turn on the oven and break out the baking pans.

There was something quaint and seemingly authentic about buying flour from wheat ground and mashed on an old millstone that would have been used to ready the ingredients for the staff of life a century ago. So, once again, I corralled my obliging husband into a Sunday outing, bribing him with the promise of a Bruce Trail hike if he let me feed my curiosity by stopping for flour at the grist mill first.

Unfortunately, the stone wasn't grinding. Last month, John Bott, web master for the Friends of Morningstar Mill, blacksmith and miller — a Jack of all trades, really — died. And, as it turned out, none of the Friends guiding tours and welcoming visitors during last week's official opening of the mill once operated by Wilson Morningstar knew how to run the stone. So, it stood idle, dusty with the remnants of John's previous milling endeavours.

Part of my draw to Morningstar and the grains of its labours was my wanting to pay homage to John. I never met him, but three years ago, as I languished on the 100-Mile Diet and lamented in a column I wrote that I was desperately lacking carbs, John sent me an email, encouraging me to come to the mill and buy some flour. The wheat is provided by local farmers down the Stevensville way. Well within of my self-imposed feeding rules, he assured.

I never did go. Maybe it was a lack of energy. But I also knew baking would be a challenge since I had dedicated myself to ensuring every ingredient in every meal that I ate came from somewhere close to home. Recipes requiring exotics such as vanilla and sugar would thwart those plans.

After learning from a co-worker that John had died in March, I felt disappointed in myself for never really taking the time to investigate this lead on local food from someone who was really trying to help me survive.

Though the millstone was silent Sunday, there was a wooden box nearby holding flour-filled paper bags emblazoned with rubber-stamped images of a miller in his quintessential pose — lugging a sack of grain. The red-ink image was smudged on some of the manilla bags — Morningstar Mill barely legible — a  sign this was no polished commercial operation.

Two dollars got you three pounds of whole wheat flour ground on the century-old stone. Four dollars got you the same amount of rye. I opted for the whole wheat bran, suddenly stricken with a craving for bran muffins. I paid my $1.75 for a paper lunch bag filled with hewn grain and sealed with two staples. And with my quarter change, I was handed a typed recipe pamphlet by a chuckling volunteer --chuckling because I only asked after I paid whether I could indeed make muffins with my purchase.

After the obligatory hike with my husband, I headed home and set to work. I opened the bag and poured out the bran. The odd remnant of wheat husks attested to the imperfect process of grinding grain on the weathered old stone. I followed the recipe only to get to the last on a list of instructions and be met with disappointment. I had to let my bran, now gooey with eggs, soy milk and water sit for 24 hours before I could bake it.

I finally got around to baking the first batch Tuesday night, whipping off 16 muffins and barely making a dent in my dough. Why 16? Because I inherited a muffin tin from my mom with room for only eight muffins. Who makes an eight-muffin muffin tin? No wonder she was quick to hand it over when I left for university 14 years ago.

Tonight, I'm working my way through the rest of the batter. But that first batch of muffins, well, they were good, if I do say so. They were made even better by the fact that some of the grains escaped grinding and wound up in my bag of bran. Every muffin has some of the hard wheat kernels — definitely not something I'd find in a version made with the flawless ingredients compliments of modern-day flour mill.

Delicious, I thought of my handiwork, as I took that first bite. Fulfilling, too. But most importantly, as I bit down hard on a tough kernal, I thought this one's for you, John.