Feeding the forager within 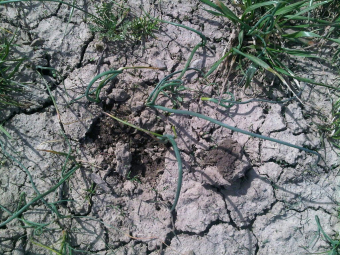 It was my favourite part of The Omnivore's Dilemma.

There was something about the idea of traipsing around the forest, foraging for food that made the chapters in Michael Pollan's get-up-close-and-personal-with-your-food epic where he ventures into California's wilderness in search of his next meal, appeal to the inner cave woman within.

It all seemed so romantic, and for this descendent of those hunter-gatherer types whose survival skills had been dulled by grocery stores and restaurants, it also seemed a little daunting. Take Pollan's adventures looking for wild mushrooms — those delicate morsels that are a prize find.

If you know what you're doing.

And though I wanted to go rummaging for food in untamed Niagara after reading Pollan's book, I didn't for the simple reason that I feared my finds, once eaten, would have me feeling like the walls of my house had eyes, or worse yet, would kill me.

But Thursday, while eating my lunch at work and feeding my brain with the tidbits on Twitter, I came across the blog post of one of the people I'm following. It was simply titled "Wild Garlic." Knowing @inhabitingtrees, who posted it, dwelled in Niagara, I clicked the link in her tweet and once again, the inner cave woman was awakened.

@inhabitingtrees talked about how she and her fellow horticulture classmates at Niagara College foraged for wild garlic on campus. Apparently, the greenspaces at the Niagara-on-the-Lake campus are teeming with the stuff that halitosis is made of.

Clumps of wild garlic near the vineyard at Niagara College.

Well, that settled it. Even though I had a major web design course project deadline looming, I was going to spend my Good Friday foraging for wild garlic. I did my research, so I knew what I was looking for — chive-like, spiky blades that grow in clumps.

Turns out, the Ministry of Agriculture, Food and Rural Affairs classifies wild garlic as a weed. It's also commonly found in vineyards. And it's also only found here in Niagara. Serendipity, I say. I also peppered @inhabitingtrees, a.k.a. Katie, with questions about finding the aromatic.

I told my plans to my husband Steve, who responded with a furrowed brow. He's such a good soul, though. He humoured me and came along on my "hunt," which started at the Niagara College vineyard.
Armed with a plastic spoon, I felt like I won the lottery when I stumbled up my first patch of wild garlic — real, live wild stinking rose — shortly after getting out of the car.

"Look!" I exclaimed as though just spotting a household name celebrity.

To be sure, I plucked one of the thin, dark green blades and chewed. My mouth filled with the mild taste of garlic. Bingo!

I started digging with my plastic spoon. I don't recommend using plastic cutlery to dig anything up but in a moment lacking any real clarity before leaving the house to hunt, I figured for some reason, it would suffice for the task ahead. The hard soil surrounding the jackpot of small white bulbs made sure it didn't.

Steve, a little baffled at my poor planning, went to the car and dug up an old screw driver to plunge into the cracked, dry earth and free my wild garlic from its clutches. It worked. Sort of.

After a good half and hour, I had six bulbs. Six tiny bulbs. My inner cave woman was starting to languish. Steve was starting to ask if we couldn't just go to a grocery store, all the while wondering how he got wrangled into watching his wife digging in dirt like a child in a sandbox on this remarkably beautiful Good Friday.

My find unearthed at Niagara College.

Resolve came back to me.

"You can't get this in a grocery store," I told him, determined to be one of those those salt of the earth folk who can find food out in the wilds of a well-maintained vineyard. Determined to be like Michael Pollan or @inhabitingtrees. Determined to enjoy the food that had always been under my nose, free for the taking, if only I had bothered to look.

Good soul that he truly his, he caved and drove me home to get my gardening trowel. I was eager to get more garlic because plentiful patches abounded on the border of the rows of naked grape vines. My inner cave woman was feeling greedy.

Back at it a short time later, even my trowel was no match for the caked earth. It snapped in two. But not before managing to dig up a few more delectable heads that I envisioned making into soup or adding to pesto.

Finally, though, the inner cave woman gave in to guilt-ridden wife, who saw a very bored, unimpressed husband watching over her.

To appease both, I suggested a hike at nearby Woodend Conservation Area, knowing there was a good chance of finding more wild garlic — wild garlic that might be lodged in soil kept soft and moist by the forest that sprang from it.

Boy am I grateful to the guilt-ridden wife. Just a few short metres from where we parked the car at Woodend, I spotted it. The paydirt — A thick, lush clump of wild garlic under a pine tree.

The paydirt at Woodend Conservation Area.

I carved it out of the ground with my broken trowel and felt like a kid in the candy store — or Cro Magnon in Mother Nature's produce section.

There had to be 40 bulbs, more and more rearing their heads as I pulled apart the clump, freeing it from damp dirt and earthworms. Even Steve was vaguely amused as he snapped photos with phone.

My harvest at Woodend.

I carefully wrapped my harvest in a plastic bag and put it in the car before guilt-ridden wife came back and suggested going for a hike. Opening the car doors an hour later when we finally called it a day, we were hit with the hunger-inducing scent of garlic. It was the most delicious smell, made all the better with the knowledge I gleaned that garlic from the wilderness. The knowledge that I could go into a forest and find food.

"Wow," Steve said as he got behind the wheel.

The guilt-ridden wife was relieved.