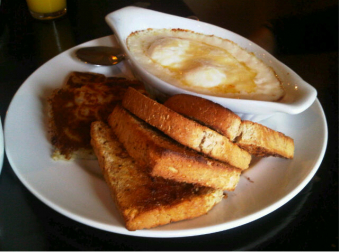 I pondered for days what I would wear to brunch on Sunday.

Months ago, I looked at a menu for August, a restaurant in Beamsville that's a partnership between a local chef and gardener, after a friend recommended having late Sunday breakfast there. In an instant, I knew I would order the blueberry pancakes. But looking at the menu, I also instantly knew this was fine food. And fine food usually comes coupled with a fine setting and fine diners.

That had me hearing the tune 'Which one of these is not like the others' as I wondered if I could get away with wearing jeans to brunch, even if they were a trouser cut with a dark wash. We finally booked a table at August for this past Sunday at 10 a.m.

Trouser jeans it was because at that hour on a Sunday morning, I'm all about comfort. Turns out, so is August.

Once home to a divey roadhouse on the edge of Beamsville, August's digs are definitely more upscale than the previous incarnation. But as soon as you step inside, you're greeted by a clean, warm yet sparse decor — comfortable like a pair of trouser jeans.

There isn't a trace of pretense anywhere in August. Simple metal arch-backed chairs. Tables sans table cloths. Mason jars of dried goods on the counter near the entrance. Muted colours on the walls. The interior is as down-to-earth as the concept of a restaurant that has an in-house gardener growing the veggies it serves.

The setting also reflected the menu of simple, uncomplicated local ingredients combined to make delicious meals. My blueberry pancakes were served with White Meadows Farms maple syrup. There were offerings of ham from The Good Shepherd, a local abattoir, house-made sausage, house smoked salmon, and crepes with homemade preserves.

My pancakes were good — they were also huge — but they weren't rave-worthy like the meal of my fellow bruncher, Sonia, who had Amy's baked eggs with aged Cheddar and cream. She described it as a heart attack on a plate as she sopped up the eggy, cheesy, creamy goodness with her thick slices of toast.

From my vantage point, it was the kind of heart attack that would cause you to at least keel over with a giant, satisfied smile.

My other brunch companion, Monique, had the omelet feature of the day — spinach, brie and bacon — with breakfast potatoes and a heaping side of salad dressed with a roasted onion vinaigrette. It certainly had a healthier air than Sonia's meal, but looked just as delicious.

Just as impressive was the bill. Think greasy spoon-like prices without the greasy spoon. My three whopping pancakes and local syrup washed down with a large glass of OJ came to just over $10 with tax. The omelet rings in at $8 and the swoon-worthy cardiac arrest-inducing baked eggs are $10. And the jean trousers? Apropos for one the most comfortable restaurants I've been to in a while.