The Wonderland of ALUS 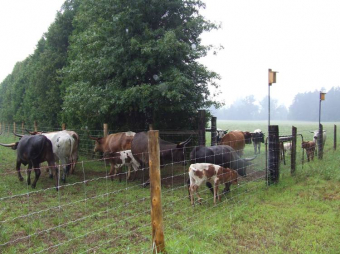 Bryan Gilvesy's Courtland farm has become home to some squatters.

No worries, though. Gilvesy, a cattle farmer in western Norfolk County, has come to expect their arrival each spring. In fact, he looks forward to it.

The guests taking up residence on his farm are blue birds and until about three years ago, Gilvesy had never seen hide nor feather of them. Now he makes sure they're comfortable during their stay. Gilvesy recently installed 42 blue bird boxes on his pastoral property for them to roost.

"I never saw a blue bird in my life. Now I notice that they're here," Gilvesy said.

Gilvesy has his own land stewardship practices to thank — practices that have been further encouraged and rewarded by a pilot program in Norfolk called Alternative Land Use Services (ALUS).

ALUS is a farmer-driven initiative that sees marginal cropland taken out of service and reclaimed by nature. In return, farmers are paid a fair price for the good work they're doing for the planet.

It's a concept Gilvesy would like to see happening in Niagara — and anywhere else outside of Norfolk, too.

In the wonderland of ALUS, that converted marginal cropland is seen as "natural capital." Agriculture and the earth work in unison, instead of the pressures to make farming profitable putting the two at loggerheads.

"It's allowed us to reconnect with the reasons why we're farming," said Gilvesy, who chairs the Norfolk ALUS Pilot Project. "It's farming in synch with nature. That's something lost in modern agriculture because you turn to standard production methods, or buy more fertilizer this or more fertilizer that."

ALUS was a concept first discussed by the Norfolk Federation of Agriculture in 2001. Farmers were keen on the concept but finding the funding to make it a reality set off years of work and — finally — contributions from a dozen wildlife and provincial organizations, including the Ontario Trillium Foundation. Local farmers raised $1.25 million to get the Norfolk ALUS pilot project officially started in 2008.

Gilvesy joined the effort in 2005 after trying to find funding to build a stream crossing on his farm that would protect the waterway from his longhorn cattle.

"I thought surely there must be money for this because we know there's money for mitigation," Gilvesy said.

Much to Gilvesy's chagrin, there was little green to go green on the farm. He said he was told to let  his cattle run amok and do some damage to the stream, then he could get some cash for his project. His findings angered him, he said.

A friend on the Norfolk Land Stewardship Council enlightened Gilvesy about ALUS. He was instantly sold on the concept. Now, Gilvesy's cattle have have a solar pump moving water their way and a healthy stream continues to flow through his farm.

"We have a long history of being stewards on our farm and this just made the link to what farmers have always done," Gilvesy said.

That's not all Gilvesy has done with land that once grew the king of crops in Norfolk — tobacco.

He planted eight acres of prairie grass to create habitat for birds. Soon after his first season growing the deep-rooted blades, he realized that prairie grass thrived in heat and drought, flourishing further by burning the thatch. But Gilvesy figured his cattle could do as good a job clearing the matted grass by  making a meal of it, so come every August 1, out to pasture they go.

It's a natural diet for animals built to eat grass, Gilvesy noted. He added his greenhouse house gas emissions are cut because he doesn't have to mechanically harvest cattle feed anymore. And he has a field that sequesters two tonnes of carbon per acre. That's more than if he planted a forest on his former golden leaf land, he said.

Next, he added native flowering plant species that would attract bees and fix more nitrogen in his soil, enabling his prairie grass to grow faster. With thousands of the winged pollinators buzzing around his farm in the spring and summer, Gilvesy said he has "a captive audience of bees" that helps his neighbours get their growing seasons going.

Bryan Gilvesy (left) checks out a pollinator hedgerow while giving a tour on his Courtland farm. Newly seeded prairie grass to the right.

Gilvesy also has a captive — and growing — audience of farmers signing on to the Norfolk ALUS pilot project, which has funding to continue until at least 2012.

Fifty-five farmers have joined the effort so far, letting nature repatriate the marginal land on their farms.

"We don't want really good production land," Gilvesy said. "That would be a mistake. All we're trying to do is identify lands that provide an ecological service or both."

Another 24 farmers have been approved to join the pilot this year. Gilvesy said he figures by the time the growing season is in bloom, 90 Norfolk farmers will be purifying air and water, sequestering carbon and boosting biodiversity with ALUS.

"The farmers that have enrolled, the early adapters, they've been relatively good stewards of the land above and beyond the normal guy," Gilvesy said. "This really appeals to them because they're getting rewarded for it."

Here's how: Those involved in the pilot are paid the rental market price for the number of acres they devote to ALUS. But Gilvesy and crew have bigger rewards in mind for ALUS participants. Think Ontario Ecological Credits — environmental Hail Marys that anyone can buy to offset their carbon emissions. That money would go toward funding and sustaining ALUS participants.

Not only will the planet reap "a whole suite" of benefits, even the "climate change deniers" could get on board with these credits, Gilvesy said. They won't feel their money has been wasted because they're paying for areas to be naturalized and Gilvesy knows naturalized areas are a beacon for tourists — a pastoral playground for people wanting a change of scenery more than wanting to change the world.

Add to that some of the numbers Gilvesy said he's seen about the value of land in areas where ALUS would be a boon, and he has no doubt about the financial feasibility or the value it provides in terms of wildlife habitat, tourism, water filtration and carbon sequestration.

The Ministry of Natural Resources has broken down some numbers: a wetland near an urban centre is worth $25,000 a year in environmental goods and services.

David Suzuki has valued each hectare in the greenbelt, the agricultural preserve that rolls across north Niagara, at $3,487 when it comes to the ecological advantages that land offers.

A map of Bryan Gilvesy's farm with ALUS features

All that's missing is provincial involvement to take ALUS from pilot project to permanent program.

Meanwhile, Gilvesy and the Norfolk ALUS team have been busy selling the concept to other farmers to make ALUS "bullet proof."

"We realize now that farmers are not only good stewards and have the skills applicable to fighting climate change... we have this ethic that needs to be utilized," Gilvesy said.

Farmers in Vermillion, Alberta, have signed on. Growers in Victoria County, near Lindsay, have also invited Gilvesy to speak about ALUS on several occasions. His next visit in the coming weeks will come with news that farmers there have raised the necessary $1.25 million to start their own ALUS project.
Haldimand County farmers have also had their interest piqued by what their neighbours are doing. But other than a group of college students from Niagara, Gilvesy said he hasn't had any inquiries from this region.

Given the facts and figures he knows about farming in the greenbelt, Niagara is fertile ground for ALUS, he said.

"We're looking at expanding aggressively but let's walk before we run, seize the opportunities where they're available," Gilvesy said. "Somebody's got to say 'We have to get organized and raise the funds.'

And raise the profile of farming and those working the land, he noted.

"With ALUS, we make a much stronger connection with people in urban centres as to the value of the farmer and the value of local food," Gilvesy said. "Now we have a compelling story to tell."

For more information about the Norfolk ALUS pilot project, email Gilvesy at bryan@yuranch.com.