The sweetest time of year in Niagara 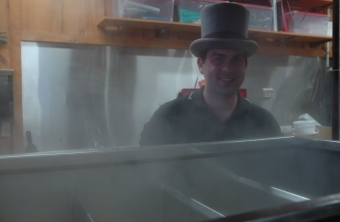 Richard Bering is certain everything tastes better with maple syrup.

"We experiment a lot with it," Bering said. "We put it on pretty much anything. I don't think there's anything that you could put maple syrup on that would not make it taste better. It always makes things taste better.

As the sugar shack operator at his family's White Meadows Farms in Effingham, Bering comes by his penchant for the quintessentially Canadian elixir naturally.

He'll be able to keep feeding his fancy now that the maple syrup harvest is underway, an annual rite of passage from winter into spring that started in the Berings' sugar bush March 3.

"It's pretty late this year and we have a whole lot of warm weather coming up now, which isn't good for sap production," Bering said Thursday, when the mercury promised to avoid plummeting past the freezing mark for the next several days.

Without that freeze and thaw cycle, he said, a tree's sap production slows and the 5,000 taps in the White Meadows' thicket of maple trees start to heal.

It's 5:30 and Bering and his brother Nicholas have been boiling sap since 9:30 that morning. The sweet, caramelly smell their hard work emits dances in the air. With 12,000 litres of  sap to boil down Thursday, Bering figures he'll be at it another couple of hours -- an easy day compared to the 16 hours he clocked a day earlier.

"The sap you collect today, you boil today is the saying in the maple world," Bering said, adding the tree juice can spoil quickly.

He's hopeful his days won't get too much shorter anytime soon, given it means the end of harvest. But so far, he said he's impressed with this year's vintage of the pancake house mainstay.

And probably the only Niagaran to say this, Bering said last year's soggy summer was a blessing. It helped set up a good harvest.

"There was lots of moisture in the ground that the trees picked up," he said.

Still, Bering isn't calling it a good year yet.

"We really don't know until it's done," he said.

Along a window sill, several small bottles filled with syrup are lined up -- a liquid diary of each day's work in the sugar shack this year. As the days go by, the syrup takes on a decidedly darker tone, signalling a change in the sugar as the trees get closer to budding.

The light grades are ideal for candy making, the medium for serving with French toast and the dark syrup, with its strong flavour, to stand up to other ingredients in cooking.

While the 12,000 litres of sap Bering and Nicholas had been boiling down Thursday sounds impressive, those untrained in the ways of maple syrup production would never know that's what they started with by looking at the finished product. It takes 40 litres of sap to make one litre of syrup. It also takes about two hours to boil each batch to perfection.

Their talent is a big draw locally.

Each syrup season, about 20,000 people visit White Meadows to learn about syrup production and to try some of the fruits of the Berings' labours at their pancake house.

"It's just that maple experience, the spring time," Bering said about the crowds White Meadows draws. Maple syrup in Canada -- it's that springtime thing. It's a mixture of eating pancakes with syrup and seeing how it's done. It's a whole experience, especially for families with young children."

The White Meadows pancake house is open weekends until April 11 and every day during the March Break with service from 8:30 a.m. to 3:30 p.m. White Meadows Farms is located at 2519 Effingham St., just north of Roland Road.