Niagara Produce: Is no one buying? 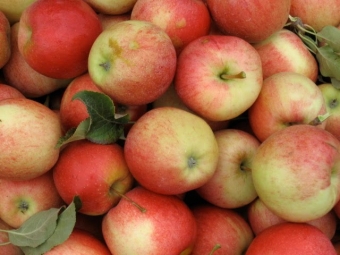 That's a question for which the Niagara Community Observatory has an answer. In the opinion of the Brock University think-tank dedicated to studying local issues, the answer is indeed, no one is buying.

I was contacted last fall by one of the researchers in this study to participate and answer some questions about my perspective on local food and consumer habits. Linda also contributed, with great wisdom, the farmer's perspective.
Now, several months later, the results are in. They will be presented Thursday, March 18 at the Keefer Mansion Inn in Thorold.

Called Niagara Food: It's Nutritious, Delicious, and Available But We're Not Buying It ... Why Not?, the free, public event, which includes a light continental breakfast that I'm hopeful will be made with local ingredients, will feature a three-person panel discussing the issue. David Alexander, Welland city councillor and vociferous green advocate, Lynn Ogryzlo, founder of the Niagara Culinary Trail, and Terri Donnia, project manager for the Region's integrated community planning, will give their insight.

It's too bad there's no farmer's voice included on the discussion panel. Unfortunately, one criticism of many local food discussions around here is that farmers are not contributing. I'm curious, are they not getting invited or are they too busy to attend these events?

I don't know that I agree entirely with 'We're not buying.' We could be buying more, however. Some are diligently purchasing local food, even driving many miles around the region to do so. Still, I acknowledged in the answers to researcher Sophia Papastavrou that many aren't, in part, because they either don't care or grocery stores, where most of us shop, aren't doing a good a job offering it.

Meanwhile, here are the answers I provided Sophia back in the fall:

I would have to say accessibility and price would  be the biggest deterrents. If a grocery store is the only place a person shops, they are going to find limited selection, particularly if it’s a store that is part of a big chain, such as Sobeys or Zehrs. There are some independent stores, such as the Harvest Barn, which do a tremendous job offering local veggies and fruit when available, and year round selling locally made vinegars, preserves, milk, sauces, etc.

The chains are doing a better job of making local food available and advertising it well, in most cases. Walk into a Zehrs store at the end of summer, and you’ll see the Foodland Ontario sign prominently displayed. As for price, sometimes at Farmers’ Markets or farm stands, produce can be priced more expensively than even the local stuff in grocery stores. I’ll give you an example: the biggest price differences I see are often with peaches. In the store, a three litre basket often costs $2.99. At a farm stand or market, they cost anywhere from $2.99 to $6.99 and most often in the middle of those two. So for people concerned about their pocket book, they’ll just go to the grocery store and save a few bucks.

The problem with that is farmers don’t usually get their fair share or much of the profit when local food is bought at the grocery store versus buying from the farmer directly. So, it’s a matter of priority for the consumer. Do they want their money to go directly to the farmer down the road or to a grocery chain that likely waited until the last minute to buy local peaches, to the point where farmers might panic and take any price they are offered just to get them off their hands, ensuring the growing season wasn’t a total write off. Yes, that really is how many chains work.

2. Local food and local consumers — what will it take to get them together?

A couple of things: more local food in grocery stores because let’s face it, that’s where most people shop. Better signs in grocery stores advertising it. But there needs to be some consistency with that. This week, for example, I bought a red pepper that said on the sign in the produce section ‘Product of Canada.’ Well, when I got to the check out and punched in the code, I noticed in tiny lettering that it said “Mexico.” Today, I bought another pepper, that said on the sign “Product of U.S.A.” I wasn’t going to buy it until I looked closely and noticed “Canada” by the bar code.

In the first case, that erodes consumer trust. In the second, for people who do want local food, grocery stores could be missing out on sales by mislabeling.

A local food distribution system is something that has been talked about for years. Seeing that actually happen would also help.

3. What do Niagara’s food consumers want?

I can’t speak for them all but for me, personally, I want Niagara produce first, any time possible. After that, it’s Ontario produce, then Canadian.

4. Niagara is an acknowledged peninsula of plenty but most produce is sent out of the area. Why?

We produce more than a population of 450,000 needs. Not only that, you have trade agreements that come into effect.

I think more consumers are becoming interested in supporting local food because it means supporting the local economy. But a lot of people don’t care. Walk into a grocery store when Niagara cherries come into season and watch the people pore over the Washington State Rainier cherries. They can’t be bothered buying from the farm stand a few clicks away or going to the farmers’ market. It’s the same with strawberries. I can’t tell you how often I’ve seen people buy California berries during local berry season. Whether it’s ignorance, or they just aren’t reading labels, who knows? But there are those who don’t care, and unfortunately, those of us passionate about local food have to accept those consumers exist.

Grocery chains are getting better at buying and promoting local food. Another example, today I was in Sobeys buying yet another pepper because I didn’t buy enough at the first grocery store and saw on the sign that Sobeys was selling peppers grown exclusively for the chain by St. Davids Hydroponics in Niagara-on-the-Lake. That made my day.

I always wondered why the tonnes of peppers and eggplants produced at this monolith of a greenhouse weren’t available here. Yes, there are trade agreements and lucrative markets stateside, but I don’t want a pepper from the U.S. or Mexico in the winter when they’re being grown a few kilometers away down the QEW. Good on Sobeys for tapping into that and creating a niche for themselves.

So, to sum up, grocery stores are doing a better job of providing local produce, some more than others. Again, it will be trade agreements that limit how much, though, that they can and will provide. That shouldn’t stop us from continuing to asks them to stock more local produce, though.

6. Local food and local consumers: Is there a divide?

In some cases, yes, because of accessibility to local food or because of a lack of interest in it. Would better marketing work? Maybe in some cases but not all.

7. What makes us buy locally?

A sense of pride in what this area has to offer, a sense of concern for our local economy and keeping it working, the importance of taste and getting things on the dinner table in a fresher state, and the environmental reasons, though holes have been punched into that argument.

Price — it can be cheaper, ignorance about what’s available locally, a lack of pride in local offerings, convenience because it’s easier to do the one-stop shopping trip at the ginormous supermarket, lack of concern about freshness, just simply not caring/indifference, and depending on the season, a lack of availability of local produce.

You bet and they try to do that. I see that in my coverage of agriculture, the innovation of farmers — take a Pelham farmer who is growing popcorn now to be able to call his maple kettle corn a truly  local product, which his customers want.

There’s also tonnes of work being done at the Vineland Research and Innovation Centre to develop varieties of fruit that can be grown locally that consumers want to eat and aren’t developed simply for the ease of growing or disease resistance, as was the situation once. In those cases, taste is secondary, but those heading up the revamped research station assure those days are over.