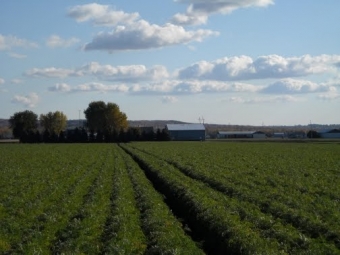 Monday, January 18, 2010 was a night for small victories for the farmers of the Holland Marsh, the citizens of King Township, and the people of Ontario!

This was the night our Township Council voted unanimously in favour of an interim control by-law. Basically, if upheld by the Ontario Municipal Board (OMB), it halts the building of the power plant slated to be imposed on the Greenbelt, on agricultural land in the Holland Marsh. This will allow Township staff the opportunity to undertake a study to review land use policies and development standards regarding power generation facilities within our Township. )Currently, there is nothing to this effect in the municipal bylaws). This will allow our municipality to bring itself “up-to-speed” in these changing times.

I believe this will become a provincewide issue that will continue to impact all farmers because municipalities and the province have failed to look at smart planning. Oakville has already passed an interim control by-law for the reasons cited above and it was upheld by the OMB.

As one Councillor put it, “I never would have thought we would ever have to deal with the building of a power plant in the Holland Marsh.”

This statement sums up what people who are familiar with the Holland Marsh have been saying all along during this battle. The Ministry of the Environment required only the most basic environmental assessment — the same assessment that would be given to a small windmill project. To date there are no studies available about any negative impacts that emissions from this type of industry would have on organic/muck soils, which is what the Marsh consists of.

The proponent has been quoted in our local papers saying this bylaw is just “a political move” and that the Township has “broken the law” by implementing it. They see this move as “bad faith” maneuvering, and “there’s no logic to the action”.

Really?? Then, it would appear they are as short-sighted as the provincial managers. I see it as protecting the food supply for the people of Ontario. The only issue showing “no logic” was the decision to put this industry in the Holland Marsh in the first place!

A preliminary hydrological study of the site has been done, independently, which does not favour the proponents’ position. This site is in a floodplain, which goes against a section of the Provincial Policy Statement; and under the Greenbelt Act, no matter how the proponent tries to construe it, a power plant just isn’t compatible with agriculture. The residents of the Holland Marsh/King Township will not benefit in any way. The proponent has stated that agriculture uses electricity, so, therefore, this industry is compatible with this highly productive food growing area. I beg to differ. We are on a different grid and will NOT be using any of the electricity generated by this power plant.

Now, while all of this would appear to be cause for celebration, if our provincial managers want this project to go ahead, it will — wrong location or not! They can override any decision that is made. We can only hope that the powers that be finally realize the importance and value of agriculture to the success of this great nation.