A new year, another crop of resolutions. This time, they're tasty 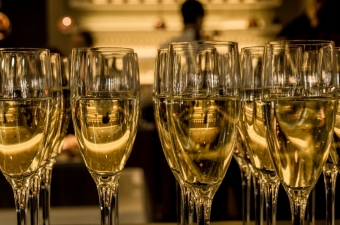 I try to avoid resolutions. I'm not the gal with the "stick-to-it-iveness" to actually make my resolutions become a way of life.

Three years ago, when I dared to make a resolution, I resolved to get to work earlier. That lasted one day. The next, my desire to sleep those extra five minutes, not surprisingly, won out and continued to do so each day following.

Most years, I aim to make that year better than the previous, with no definite plan, just the mantras of be a better person and do your best at all you do. But then, the busy-ness of life gets in the way and sometimes, I'm forced to accept that things will just have to do. It just is what it is.

This year, though, along with a do-over of the above resolution, I thought I might make a few about something I feel more confident will stick. No surprise, they involve food.

1.) Make Sundays my cooking day again. When I was a single, apartment-dwelling chiquita, this is what I did on Sundays, especially when I was at my most broke. To me, sitting down to a good home-cooked, healthy meal is one of the most satisfying experiences. But I found that the preparation was just as therapeutic as the reward for all my hard work.

I used to spend hours upon hours making lunches for the week ahead, mostly to save some coin but in particular after my lunchtime takeout options shrunk considerably when I became a vegetarian. I have so many great veggie chili recipes, for example, and soup is my favourite food. I also have a great stuffed pepper recipe — all good options for labouring over, then freezing and enjoying later. So here's to more culinary Sundays.

2.) Avoiding chain restaurants if I do eat out. This is something I do anyway so I know it's a resolution that I'll succeed at. I ate at a chain restaurant the night before my wedding in August — it was big, an easy place for people to meet and I figured it had enough of a variety on the menu to keep everyone relatively satisfied.

But otherwise, I avoid chains like the plague. I find them overpriced for what I do get and the food isn't that good. Ever see that episode of Marketplace where Wendy Mesley exposes how many calories are in that Montana's veggie burger? Or how a person gets more than the required daily caloric intake from one trough of pasta at Boston Pizza? That sealed the deal for me, even though I was already unconvinced of the chain restaurant's merits.

There are some amazing local, independent restaurants around here. It was my birthday last week and my husband, Steve, took me to the Stone Road Grille in Niagara-on-the-Lake where I had carmelized shallot and ricotta gnocchi with chantrelle mushrooms, autumn squash, braised greens and a sage brown butter sauce. It was delicious. And even that's an understatement. The flavours were warm, unexpected — no tomato sauce to be found near this gnocchi — and creative. The service was also fabulous and in no way pretentious.

We don't eat out much but when we do, we try to make it a treat and take in all the culinary delights unique to Niagara. Treadwell's, the Wildflower, the Keefer Mansion, Inn on the Twenty and the Spotted Calf are all places I've had good experiences and there are so many more on the list that I want to try when time and the wallet allow: the Niagara Culinary Institute, August, Tony DeLuca's place in Niagara-on-the-Lake for fine dining. LaScala for Italian is another place I've always been curious about and need to make a point of trying this year.

Even when I need something cheap and cheerful, there are no shortages. I love Joe Feta's when I'm hungry for Greek. The veggie Dolmades dinner is my favourite. Pho Dau Bo for Vietnamese — it's simple, inexpensive and the papaya shakes and free green tea rock. The Noodle House on St. Paul Street has the best Thai green curry. It's got delicious kick with its lemongrass, coconut milk and natural spice. It's also only $9.95 and a huge portion. The service is also exceptionally friendly.

When I do eat out for lunch, a common stop for me is to see my friend Tony, who I affectionately refer to as my Lebanese man. He and his wife, Amira, make the most delicious lentil soup at their Lebanese restaurant, Tonami, next to Market Square in St. Catharines.

3.) To occasionally go splits on wine from the Opimium Society with my mom and not feel guilty. I diligently head to the VQA section of the LCBO every time I'm in there. I love looking at all the wines — the Glendale superstore is an awesome place to browse when it's not the week before Christmas.

Niagara has such amazing offerings and it's something that I feel we as residents of the region and province should relish — and drink! But after my trip to Europe this fall, where I sampled the wines from the various regions I visited, I really fell for some Alsatian rieslings. I was obedient when it came to customs, (I'm a bad liar) and only brought home two bottles of wine, one of which I cracked at Christmas. It was beautiful and while my palette is not sophisticated enough to tell you about peach on the nose, citrus in the finish, or vice versa, the colour was a wonderful gold and it went down the hatchet with ease. The taste was divine.

So when my mom, also a staunch supporter of VQA in BC and Ontario, offered to share her Opimium Society catalogues after a friend got her a membership for her birthday, I decided why not? I don't know when I'll get back to Strasbourg or Colmar and I don't know if I can wait until then for more of that region's riesling.

4.) Eat more dessert. As a bit of a penny pincher, I usually skip dessert. Heck, I feel like I've won in the lottery if I go home with doggy bag. Lunch for the next day! Two meals for the price of one! Hurrah! So aside from dessert having been perceived as a bit of a frill, there sometimes isn't room for it. But in those occasions where there is, I'm not going to deny myself. When I had the seasonal fruit sorbets at the Stone Road Grille, all of which were homemade, I knew I had been denying myself something great by refusing dessert menus in the past. Who knows? One day, I might even just skip dinner and go straight for the sweets. I'll keep you posted.