A sandwich, please. Hold the bread 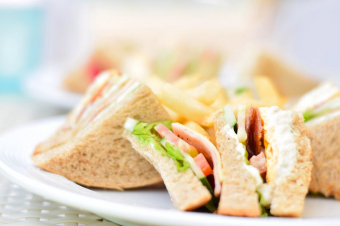 It's the staff of life.

But would you be willing to sink your teeth into some bread whose main ingredient happened to be grown on life's detritus and mouldering refuse?

There's no shortage of innovation when it comes farming in Niagara. But this might be a little too innovative, even for me.

Last week, St. Catharines Standard reporter Matthew Van Dongen broke the news that Walker Industries, with the help of University of Guelph researchers, had been testing out crops on a portion of closed landfill for the past three years.

"I have high hopes that we'll be harvesting a crop off the top of the landfill next fall," said Timothy McVicar, general manager of operations for Walker Industries' landfill on the border of Thorold and Niagara Falls.

Walker Industries isn't known for growing cash crops, unless you count harvesting saleable compost from our discarded food waste or energy-filled methane gas from its landfill.

But McVicar figures the principle is the same: making a beneficial use out of waste.

"I've always maintained that a landfill's useful life isn't over after it closes," said McVicar. "I think our experiment is proving me right."

Corn, soybeans, red clover, alfalfa, and Timothy hay were all grown atop a trash heap and used as cattle feed or in biofuels.

Winter wheat apparently did really well, too, and tests show it's safe for human consumption.

The idea is not as weird as it looks, said Ray McBride, a professor in the university's school of environmental sciences.

"You're not actually growing anything in garbage," he emphasized in a phone interview from Guelph. "There is almost a metre-and-a-half of compacted clay on top of (the trash)."

Another one or two metres of topsoil covers the clay landfill cap.

"The root systems of any of our crops don't extend further down than a metre," he said. "There's no issue of (root) contamination from actual garbage."

Using decommissioned landfills to grow crops for biofuel would certainly throw a bit of a monkey wrench into ethical debate surrounding ethanol and whether food acreage should be used to power our cars, I'm doubtful the trashy wheat will be an easy sell to those needing a bread fix. Even the most hardcore locavore types around these parts who would likely sell off their backyard garden and canning set in a second for a slice of bread made with Niagara wheat.

Still, I give Walker Industries two very big breadsticks up for trying this out.