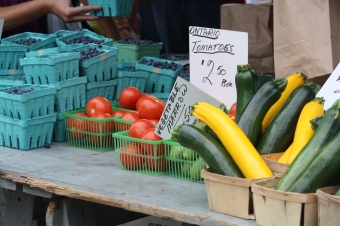 So congrats to Zehrs — St. Catharines for picking up a gold award in the creative category of the Ontario Food Retailer Awards.

They were handed out by the Ministry of Agriculture, Food and Rural Affairs earlier this month.

I'm not entirely sure which Zehrs store snagged the honours, since I can think of two in St. Kitts. Maybe it was both. But I was surprised to see there weren't more Niagara representatives among the winners, to be honest. And maybe a little disappointed, to boot.

The awards are handed out to stores for the innovative ways they promote Ontario produce. Metro stores seemed to clean up and as for cities, Windsor appeared on the list more than any other, with some stores winning in multiple categories.

Good on Windsor. Maybe some of that local produce being promoted was from down the road in Leamington or Kingsville where veggie greenhouses crowd the landscape.

But still, why not more winners in Niagara? We're in the buckle of the fruit belt with lots to promote. I understand that stores can be limited by what the chain as whole actually purchases that's local, so maybe that was the problem. Or maybe our stores don't have to do as much promotion because we as Niagarans can easily hone in on what's local no matter where or how it's displayed in stores. (Somehow, I doubt that one).

I'm also curious which Zehrs store got the award because I felt that the promotion of local produce this year left something to be desired at the Geneva Street store, though there was lots of local produce to be had during harvest. There was a great apple display they had recently but promotion of Ontario produce seemed toned down compared to the Glendale Zehrs, where, last year at least, when it was my regular store, Ontario produce greeted you when you walked in the door. You couldn't miss it. The Foodland Ontario sign was a beacon of local goodness amongst all the foreign competition during harvest.

Awards aside, however, promotion of local food in local chain stores seems a little ho-hum.

My recent experiences as a shopper have taught me some stores need to do a better job keeping the signs in their produce section up-to-date. Last week, after an appointment nearby, I went to buy peppers at the Glendale Zehrs to make a pizza for dinner. I reached for a red pepper because the sign said product of Canada. The green ones were from the U.S. so I chose a red pepper specifically because it was Canadian.

I got to the check out and when I went to punch in the product code, I noticed in the fine print on the sticker that my red pepper was from Mexico. I felt a little duped to say the least. I'm sure it was accidental on the store's part but if people are going to make more of a concerted effort to buy local and domestic, the least the stores can do is help them along.

A similar thing happened at the Superstore a few days later. I was buying more peppers, this time for a pot of vegetarian chili, when I looked at the signs and saw the peppers, no matter what colour, were either from Mexico or the U.S. Fortunately, I happened to glance at the peppers themselves and noticed on the bar code stickers that the orange ones were Canadian. Glad I looked but again, they weren't advertised for what they were — an annoyance for me as a shopper who makes conscious choices about what she's buying.

My pepper purchasing ways eventually took me to Sobeys because I forgot to buy two peppers at the Superstore and since I wasn't in the neighbourhood anymore, I went to the store closest to home. I tend to avoid Sobeys because of it's often more expensive than other grocery stores but if ever I need a pepper again, to Sobeys I go. Sobeys gets an award from me for selling peppers grown by St. Davids Hydroponics, a massive operation right here in Niagara-on-the-Lake. Even better, Sobeys promoted it as it is on their signs: Peppers grown exclusively for the chain by this local pepper powerhouse.

Good for stores for getting local food and its promotion right. Those are the stores that get the nod and the glory from the true powers that be: the consumer.