Break out the compost bags... 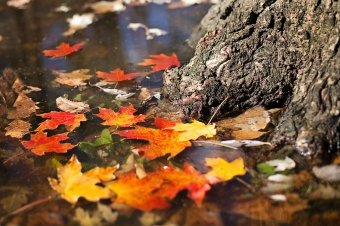 ...because while it's nearly a wrap for Linda, it's a wrap for me and my garden.

And it has been for a couple of weeks already.

So here's the run-down on the garden that wasn't and my very battered brownish-green thumb:

I started off the season optimistically with five tomato plants, one pepper plant, one eggplant and two Swiss chard plants.

Midway through the season, it became abundantly clear that two of my tomato plants decided they'd had enough. And they didn't even bother to leave me any tomatoes before calling it quits early.

I still held out hope for the other three in this cool, grey and wet summer, never having grown any before.

I got two tomatoes, total, this season. Well, three if you count the very green, unripe one that some animal decided to swipe from my struggling purple cherokee back in July. And the two I got — one was a half-eaten (by a bug) white queen so really, if I'm being honest, I really only successfully grew one and half tomatoes this year. The other one, from my yellow out, red in, which flowered the most and held out the most promise before the blooms fell off, is turning the proper shade of yellow on my window sill. I had to pick it to avoid the risk of frost the other night.

My eggplant did diddly squat. And my pepper plant had many peppers start but only one that I know of was actually harvested by my cat sitter while I was on my honeymoon. That's right. I didn't even get to enjoy the fruit — er, vegetable — of all my labour. Another pepper started last week, but then the weather turned and it seems to be stagnating.

The real success story was my chard. It just kept coming and coming. And it's still coming.

So yay! I'm not a total failure, in this first foray at gardening. It's made me feel so optimistic, I've planted some garlic already, hopeful for what 2010 might hold.

Either that or I'm in total and utter denial.

I'm going with the latter.