A zucchini for your thoughts... 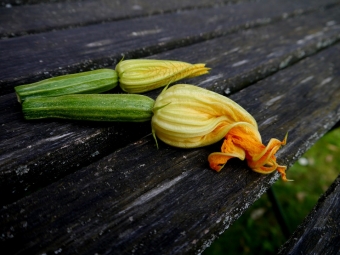 ... or anything else, really, so long as it's one less zucchini for the giver to worry about.

I'm not going to bad-mouth the green squash that people either love or hate, but it has got me thinking lately.

Do we ever try to pawn off anything else we grow in our garden like we do zucchini? At this time of year, "friends" are suddenly coming out of the woodwork — or garden — looking to unload their harvest of that vegetable I can barely remember how to spell.

I should know. I have one sitting on my kitchen counter right now. I got it about a month ago. I don't know what to do with it. I said 'Thanks' to the givers — it was a hostess gift for a dinner party we threw — and dropped it on my kitchen counter, near the junk pile. It's been in the same spot ever since.

The party's long over and this thing haunts me — mocks me, even — every morning when I wake up and go for a bowl of cereal. It's there for every glass of water I pour, every load I put in and empty from the dishwasher, every time I fill the cats' food dishes. Taunting me.

Asking me in what I imagine is an evil zucchini voice what I'm going to do with it.

All the while, I ask myself the same thing. Meanwhile, I have two giant cousins in the fridge, down from four a couple of days ago.

But really, who's the better friend here? The giver of the zucchini or the people who they're forced upon — er, I mean, who so graciously accept them?

Let's face it, zucchini is clearly easy to grow and goes nuts in the garden. Hence, the reason so many people grow them and then wind up with so many come the end of July. They're like a noxious weed. (Maybe that's what I should have planted this year so I could feel like a bona fide green thumb).

While wasting away doing my 100-Mile Diet experiment, a co-worker brought me two massive zukes from his garden. I was starving, so I gratefully accepted. But no matter how hungry I was, after a couple days of straight zucchini — I broiled it, I fried it, I even made zucchini bread — I barely made a dent in my stash.

I couldn't stomach zucchini anymore and wound up chucking their remnants, opting instead for a glass of water and some air to sustain me until my next meal.

Last week at work, on my way out, I caught up in the parking lot with a woman from the business office. She had just pawned off the last of the zucchini bread she made for her co-workers — who couldn't eat it all — on us in editorial. Not sure if we ate it, either.

Still, she was quite proud of herself because the recipe got rid of three cups of zucchini. She had another one up her sleeve for zucchini marmalade (yum?), which would use four cups. That's how she looked at recipes: 'how much zucchini will this get rid of?'

Does anyone do this with tomatoes? Peppers? Lettuce? I'm sure people who have successfully grown those veggies, present company excluded, have willing shared their bounty. But I doubt very much they've dumped them on unsuspecting co-workers and friends. And yes, I mean dumping. Of WTO complaint proportions.

So, for all you people drowning in zucchini, with friends who have suddenly developed a zucchini allergy, here's a favourite recipe of mine that will squash some of that squash for you.

It's sweet potato and zucchini bread.

Unfortunately, it's only one-and-a-half cups. Sorry.