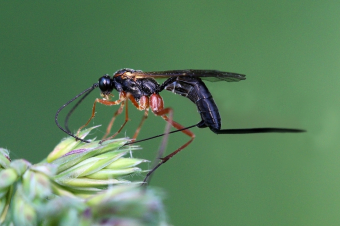 My first purchase as an official locavore two years ago was a pint of green beans from a girl at the St. Catharines Farmers' Market.

Bridgette Neufeld was her name and her father, Tom, had grown the beans that would be the making of one my first meals during my short-lived 100-Mile Diet experiment for The Standard in 2007.

I crossed paths with the Neufelds again this week at their Campden farm for the kind of story that reminds me why I love covering agriculture. It's about Tom Neufeld's foray into integrated pest management. Pardon the jargon. That's basically a pest control method that the U.S. Environmental Protection Agency describes as relying on "common-sense practices" — you know, managing pest damage by the most economical means, and with the least possible hazard to people, property, and the environment. That's a pigeon hole that synthetic chemical pesticides will never fit, I'm sure.

Neufeld is using parasitic wasps to control the European corn borer moth, which left unchecked, would devour his sweet corn crop. Not a problem if you're a consumer who doesn't mind pulling back a husk to find you'll be eating a caterpillar's leftovers. But for those consumers who need perfection in their produce, controlling the corn borer is an important job for a corn grower.

Here's the story, which appeared Friday in The Standard.

What really made this story enjoyable, aside from my appreciation for a break from the usual harvest story, was Neufeld himself. He's a regular fixture with his potatoes and beans at the St. Catharines, Grimsby and Smithville farmers' markets. But the simple list of produce he's selling belies all that goes into operating his Campden farm.

Driving up the laneway to his farm, there's hay and beef cattle on the right, corn fields on the left, chickens roaming freely and two border collies. Neufeld's take on farming is progressive, thoughtful and thought-provoking. This is a guy who cares about what he does, works hard at it and is constantly questioning and thinking about what makes a sustainable and healthy food production system. He was once a certified organic farmer who gave it up because he wanted to farm rather than drown in the piles of paper work that certification demands. (Talking to this guy will give you more assurances about the food he produces than any official certification, trust me).

He hasn't become a slave to agribusiness — he'll never grow GMO corn and you won't find a terminator seed on his property.

Still, he doesn't shun innovation or technology. The key is making the right choices, the ethical choices, in how that technology is used in our food production, he told me.

If you've read The Omnivore's Dilemma by Michael Pollan — not exactly a beach read but put it on your summer reading list if you haven't already devoured this book — then you'll recall the grass farmer, Joel Salatin, who teaches Pollan about sustainable farming. Even though he runs a mixed farm, he calls himself a grass farmer because of how he integrates the animals he raises into nature's cycles. He makes a reality of the romantic vision of farming that us city slickers are criticized for having by those who have become enslaved and jaded by industrial agriculture.

So does Neufeld. With his cows, his chickens, plans to add sheep to the mix, his rolling hay fields and parasitic wasps, and his desire to find better ways of growing food for food's sake, this is a guy whose food you can feel good about eating.