Down on another farm 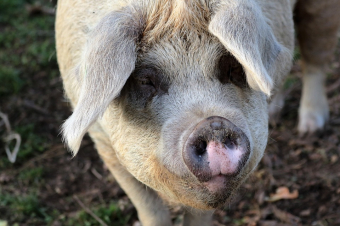 Here's a glimpse into an industry we don't hear much about in Niagara, known more for its tender fruit and grapes than hog farming.

There are about 30 hog farmers in the Region, who, in a good year, can contribute as much as $11 million to the local economy.

But it's been a while since there's been a good year, according to the producers who descended upon Niagara-on-the-Lake today and aired their beefs about their ailing industry to politicians and to

The St. Catharines Standard. Tina Verhof with the Beginning Farmers said some hog producers are weeks away from going bankrupt if they aren't given cash and quick.

It's a look at how tough farming can be. But same for the job politicians have trying to oversee the industry. I was struck by Agriculture Minister Leona Dombrowsky's honesty when she said she didn't know what the solution was to the woes expressed on placards and in literature at the event. She also didn't know if the industry was even fixable.

But Dombrowsky said she takes issue with some of the group’s claims.

Producers came to her with a sense of urgency in 2007 when the $50-million cattle, hog and horticulture payment was created, she said.

To get help to farmers quickly, Dombrowsky said her staff used numbers from the federal cost of production program to determine payments instead of having an application process that would have delayed help. Money also had to be delivered in a “trade-friendly” way that wouldn’t be confused with a subsidy and lead to complaints from trade partners.

“We were basically trying to reach the same people who were not getting their cost of production out of those markets and sectors,” Dombrowsky said.

Dombrowsky said she has asked for names of people who protesters believe wrongly received money. She’s never gotten it.

Still, she said some of the help provided by governments, such as insurance programs, haven’t helped everybody in the industry.

“That isn’t working obviously. We have farmers who are saying they’re in serious trouble,” Dombrowsky said.

But she said she doesn’t know what the solution is and any resolution will require the help of farmers.

“I don’t know if it’s fixable but we need another instrument to deliver the kind of support to farmers when they experience challenges, that will actually work for them,” Dombrowsky said.

Those who turned out, not quite in droves, at the third in a string of similar protests in the recent weeks sure hope it is fixable. Their livelihoods depend on it.

This won't be the last Ontarians hear from disgruntled hog producers. Another rally is planned for Stratford in the coming weeks.