I say farmer, you say cellphone 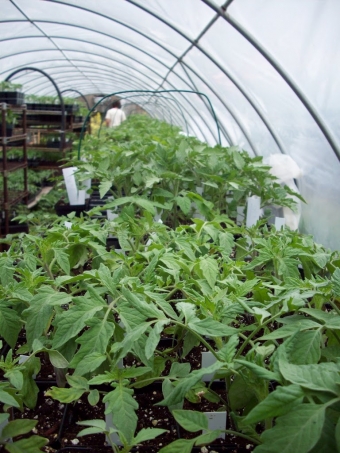 Sure, an apple a day keeps the doctor away. And now, Apple seems to want to make it easier to find those doses of nature's medicine — so long as they're local — all the while ensuring there's nothing the iPhone can't do.

There's a new application that iPhone users and wannabe locavores can tap into when they're hungry for something in season.

Aptly named Locavore, this application was launched in March to help American iPhone users eat local. It detects what state users are in, tells them what's in season at the moment and lists nearby farmers' markets. It also allows users to browse from a list of 234 fruits and veggies to see where they are growing at any given time. Links to Wikipedia and Epicurious are also provided to find info and recipes for the latest crop to hit local market stands.

Here's the sales pitch on iTunes, where iPhone users can purchase Locavore for $2.99 and have it at their fingertips when they're shopping or get bored of looking at MRI images (which makes my brow furrow. How many people have that many MRI scans they need to look at on the go to warrant an iPhone app?

Maybe it's good fodder for some dinner conversation over the local meal your cellphone just helped you purchase). Anyway...

Know the food in season near you.

Eating local food when it's in season is an increasingly popular goal amongst people who are interested in eating the tastiest, healthiest food while also being good to the environment.

Knowing what's available in your area at a given time of year is often difficult to determine, so we've taken on the task of collecting data from a variety of sources and presenting it all in the most understandable of ways. The Locavore iPhone app will come in handy the next time you're at the market and want to know what's actually being grown near you, and what is most likely to taste the best right now.

Whether you're just trying to become more aware of what's in season around you, or you are fully committed to eating only locally grown food, this app will help you know what you're options are.

Cool, right? More than 5,600 people who bought Locavore in its first month on iTunes must think so. It was also ranked #65 on the Top 100 Paid Apps list, according to the blog of Buster McLeod, the creator of Locavore. As someone easily wowed by technology and a proponent of local food, I probably would have dropped the three bucks to buy Locavore if I didn't have an antiquated cell phone that only allows me to make phone calls and send text messages. You know, communicate with people.

Which is why I'm a little skeptical of Locavore's virtues. While I applaud McLeod's creation because it will undoubtedly draw some to the local food movement and promote all that's good about eating in season foods from close to home, I also couldn't help but think 'Why use an electronic interface to find local food when you can use the human kind?'

How about this for an application — talk to the farmer selling food at the market? They can tell you what's in season, recipe ideas and all about how the food that you're contemplating eating was grown.

I know I've written about this before, but the social aspect — the building of human relationships between consumer and farmer — is part of what's so wonderful about the local food movement and a big reason why people choose their farmers' market over the grocery store. I guarantee those looking for an education about their food will get more from the grower than their cellphone.

Still, if Locavore draws more people, unfamiliar with the four seasons and the food they proffer, to the local food movement, great. But Locavore users beware. Don't let it replace your local farmer as a source of information about the food you eat.

Two and a half hours of my Sunday afternoon was proof of just how good it is to connect with your local farmer. This weekend was Linda's tomato transplant sale (the photo below shows the transplants about a week before the sale). I went to her Wellandport farm to help out. It wasn't long before I volunteered to take over the cash box duties because I know nothing about the hundreds of varieties of tomatoes, eggplant, peppers and various other heirloom goodies she was selling — except that they taste good when they appear in my CSA basket. My poor math skills were clearly stronger than my knowledge of what a good substitute for a green zebra tomato is.

As I waited for people to make their purchases, I had the chance to watch Linda in action. She took time with each person who ventured out to Wellandport to peruse her plants. She offered alternatives to those they found on her long list of tomato varieties that had already sold out. She shook people's hands — a sign of someone who stood by what she sold and appreciated people's interest in her work and their food — she offered growing tips and, if asked, the story behind the individual tomato plants with quirky names like Egyptian Tomb.

That, to me, epitomized what local eating is all about.

Not just purchasing what's produced locally, but really getting to know that food — the story and the people behind it. And it was clear from watching Linda, the people behind it are much obliged and proud to tell you about it. All you have to do is ask them, not your cellphone.