I'll pay the extra 50 cents for Ontario asparagus, thank you 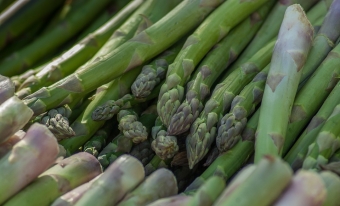 I couldn't help but be baffled by it all.

One day last week, with an hour to kill before work, I walked into a ginormous grocery store selling everything from socks to strawberries to the latest Stephanie Meyer vampire novel. There, at the front of the store stood a large display of asparagus.

Being the height of asparagus season here in Ontario, I was beckoned over. I had visions of asparagus frittata, grilled asparagus drizzled in lemon juice and goat milk Parmesan, or broiled spears tossed in a chimichurri sauce, dancing in my head.

The closer I got, though, those tasty visions were dashed by something that left a bitter taste in my mouth. The asparagus were from Peru.

Why was the biggest grocery store chain in the land flying and trucking Peruvian spears thousands of miles to its Ontario stores when a mere hour away from this particular store exists a panacea for anyone needing an asparagus fix? It's called Norfolk County. Home to hundreds of former tobacco growers who traded in the golden leaf for the green spears. The sandy soil of Lake Erie's north shore is a hotbed of asparagus production. This made no sense to me at all.

I know about the trade rules. I also know sometimes there isn't enough local supply to meet the local demand but for some reason, I was more miffed about this than the swarms of California strawberries that hit store shelves just as the local crop turns ripe for the picking.

The local asparagus season is so short. It should be celebrated. Touted at every grocery in the province. And let's face it, we do asparagus better, even if Peru has become a world leader, as far as quantity, in asparagus production. Besides, they have the climate to grow asparagus year-round. Can't Ontario asparagus growers just have this one short window of time to sell their crop without interference from the guys who have the market cornered the other 10.5 months of the year?

But the bafflement didn't end there. In my fury, I ranted publicly. I twittered about it in search of a virtual locavore to empathize, only to have someone respond with an unexpected answer.

"Which ones cost less?" someone had reply tweeted me.

I didn't know what to say in 140 characters. Did it matter? I thought. Did this person know the (pardon the cliche) true cost of our food and that even if the Ontario asparagus cost more at the cash register, they're actually less costly overall than the imports.

But really, what could I infer from four words sent to me by a stranger by way of an impersonal electronic medium? So I RT'd a diplomatic "They're the same price" because it was the truth.

As it turned out, the tweeter was advocating for Peruvian asparagus and I was relieved by her subsequent response. But all my initial disappointment inspired me to delve into the much-talked about topic of the true cost of our food. Since just about every thought has been penned on the issue already, I've included links below for the curious to do their own research. I'm unlikely to add an original idea to the discussion at this point. But the links come with a prologue, so here goes.

The question of cost was an interesting one and a double-edged sword. Let's face it. Times are tough so I can appreciate the temptation of buying something cheaper. Even when the economy is booming, I enjoy a bargain as much as the next person. But when it comes to local food, I'll willingly pay more for a pound of local asparagus. I've seen Ontario asparagus sold for 50 cents more, up to a dollar more than their Peruvian competition, but I don't care. Since when did cheaper mean better?

The 50 cents is a small price to pay for something that has less of a negative impact on the environment because the farm from whence they came is closer to my fork. Those spears may have also been spared treatment with pesticides that are fine to use in South America but that the Pest Management Regulatory Agency has poo-pooed here.

I can be spared the lecture about developing or less fortunate nations relying on exports for their betterment. It's highly unlikely that my purchasing their asparagus is going to better the situation of their people. If anything, it will likely make it worse since my money is probably going to an agribusiness giant that pays the local Peruvian asparagus grower a pittance. The agribusiness giant only cares about the bottom line, not the people growing for them. People, after all, cost money. (This would be a nice segue into fair trade but I'll save it for now).

That extra 50 cents is small price to pay for something fresher, for something that makes me feel good to support. So yes, crazy as it may sound, I want to pay more. I know it will cost me less in the long run.

Interested in reading more? Here are some related articles and books:

Book: The Politics of Food